Swimming with Great White Sharks could sound like a crazy idea, but surrounded by a solid cage and with an expert crew above you, its perfectly safe. What’s more, you will get to experience to speed, size and grace of the oceans apex predator. There is no better way to view these misunderstood and misrepresented predators, and once your heartbeat has returned to normal, or at least close to normal, you will see what we mean. 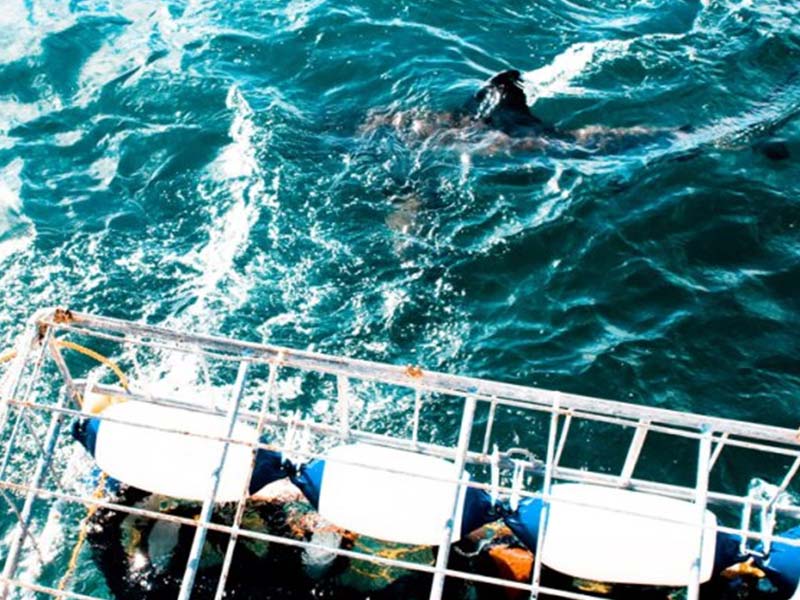 We start the White Shark Diving Tour with an early morning door-to-door collection from the Cape Town metropolitan area. Arrival 2.5 hours later at Kleinbaai, where a light breakfast, coffee/tea will be available while the safety briefing and other formalities are concluded.

We depart Kleinbaai harbour and arrive at Dyer Island only 20 minutes later and begin attracting Great Whites almost immediately with a “chum” mixture to provide an oily, yummy, fishy slick on the water which will hopefully bring them to our boat for further investigation, You will have the opportunity to photograph these awe-inspiring animals right alongside the boat and for those with the guts, its time to jump into the cage for a close up, heart stopping underwater encounter!

It is recommended that you book well in advance and allow at least 2 days diving in case of adverse weather conditions. Passengers are exposed to the open sea so purchasing of your own sea sick tablets is highly recommended, as we don’t want anything else mixing with our special “chum” formula.

Complimentary snacks, drinks, wetsuits and equipment is provided on board along with a light lunch back on land while viewing the video of the day, which you can purchase if you so wish.

You will typically return to Cape Town in the mid-late afternoon.

Although weather dependent, the White Shark Tour runs daily, as Dyer Island is a good place to see the sharks all year round. The absolute best season is probably in our winter months, when sharks are particularly active in their feeding pattern. The following guide-line is based on tours done over past years and months may overlap slightly.

You are supplied with a wet suit, mask & snorkel for your time spent in the cage and will be offered a 2nd opportunity if time allows. There is also great viewing from the top deck of the boat as you have a 360 degree visual of the sharks.
There is air available on board, however we rarely utilise this method as the bubbles deter the shark from coming close to the cage.
Cage viewing is actually really easy as the skipper will draw the shark to the boat using a large Tuna head on the end of a rope and then tell you to go under and hold your breath for a few exciting seconds as you get to experience your own personal moment with a Great White shark. Something you will never forget!

During Whale season (June – November) we will stop in Hermanus to view these giants of the ocean from the cliffs above the old harbour. Due to tides and collection schedules, we can only confirm exact collection times at 16h00 the day prior to your tour. 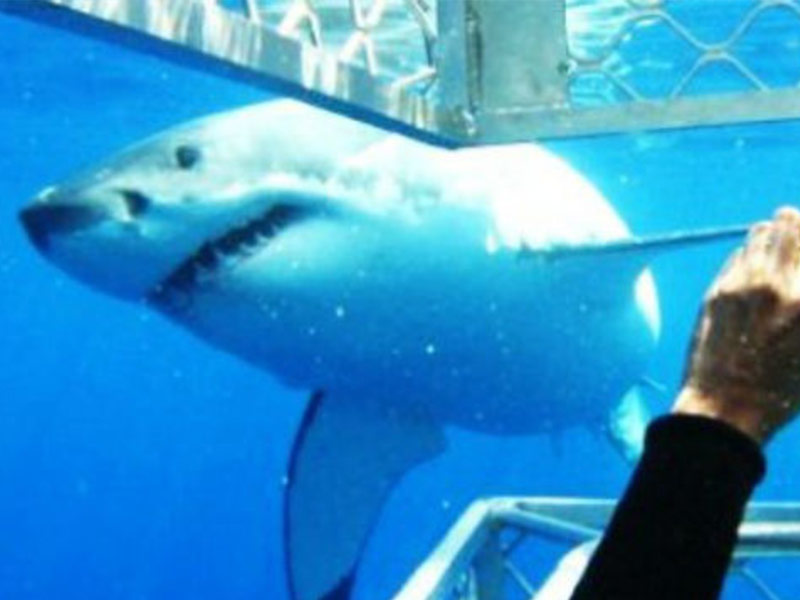 Excluded: Sea sick tablets if necessary, DVD of your own experience

FOR THE NEXT BIG ADVENTURE …

We really appreciate our clients feedback on their African Blue experience as we are constantly striving to improve our service levels and selection of tour and safari experiences.

“White Shark Dive”
5 of 5 stars
Reviewed 30 September 2013
WOW! If you haven’t done it – do it! My short stay in Cape Town was hampered by bad weather, which meant that most of the shark cage dives were cancelled. However David managed to find me a dive to go on with the only operator who was running the day I had free. I can’t thank him enough because it was an awesome experience. Something I will never forget. The operators were excellent and made sure that I got the shark experience I was after. Thank you!

“Well-organized, very enjoyable tours”
5 of 5 stars
Reviewed 1 January 2015
Even though my African Blue tours were outsourced to Hylton Ross and another company for the shark cage tour, everything went off without a hitch and I had a great time. For African Blue tours part, I must say that David Smith did an excellent job of communicating to me clearly all the details that I needed to know prior to departure, and he was very quick to respond to all my questions via email and texting; his competence, as well as his professional and friendly demeanor were greatly appreciated…especially since I was a bit stressed out due to my procrastinating till the last minute to make tour arrangements for Capetown…totally my fault but he worked with it (which may explain why the tours were outsourced)! Anyhow, kudos to African Blue and David Smith…hope I am lucky enough to return to South Africa someday to try some more of the tours- they all look so fantastic! 🙂

“Great Cape Town vacation thanks to David!”
5 of 5 starsReviewed 15 January 2014
We had a wonderful experience in Cape Town with David as our guide. We went shark diving and wine tasting, the wine tasting being the most perfect afternoon I could have imagined. He knew exactly the experience we were looking for. David also helped us plan our safari at Kruger National Park. I would recommend his services to anyone!

“David, tour guide above all !!”
5 of 5 starsReviewed 16 October 2013
David took a group of 8 of us on a shark dive and Cape peninsula tour in mid-september that was destined to be doomed from the get go. Weather indicated there would be rough tides and everything looked like all things wouldnt happen. David did such a good job with arranging all activities associated with the tour. He was very engaged (even before we reached to SA) and kept us abreast to all matters that had to do with the dive. Even after our orginal tour was cancelled he made a special effort to arrange another tour for us. Trust me when i say, you will be well taken care of. He is very knowledgable of the area and the history and you will not be short changed. Highly recommended!!

“Sharks, peguins, cape of good hope and more”
5 of 5 starsReviewed 6 October 2013
David was really great, when we were in cape town the weather was not good. The day before our tour with David we could not do what we had planned so David agreed to just add it to our tour with him. He was organized and kept our disorderly group in line and on time for our various activities. The day we spent on tour with African blue was the best day I had in cape town.
At the end of it all I left something valuable in the tour bus and David ensured its safe return the next day. I could go on and on about the tour ……you just have to do it! I highly recommend African Blue tours!!!!!!!

“Sharks whales and Cape peninsula”
5 of 5 starsReviewed 2 October 2013
We travelled to Cape Town as my husband wanted to see Great White sharks. David arranged a Shark Dive Tour combined with a private tour to Hermanus to view the magnificent sight of Whales gracefully swimming by from the cliff tops. This was a fabulous day and the memories will stay with us for ever. We also did a private Cape Peninsula tour with David which again was a wonderful experience as David is a very pleasant knowledgeable person who gets great pleasure out of showing you his lovely country. This tour has everything, penguins, seals, cape point and spectacular scenery. Lunch at the Two Oceans restaurant was made even more special as Whales were passing by. Will be returning to South Africa .I read lots of reviews as they really do help but very rarely write them. Thank you David

Check out some of our other Tours